A Timeless Look Into the Development of Wrought Iron

A Timeless Look Into the Development of Wrought Iron 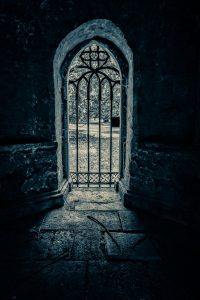 The appearance of wrought iron is one that is undeniably aesthetic and casts a rather eloquent impression in homes. If you’re not familiar with the influential nature of wrought iron, just picture a Victorian-esque mansion in the middle of a forest astir with life, guarded by a fence of wrought iron leading into a professionally cut and maintained garden terrace. If this image is familiar to you, then you know exactly how classy and elegant the detail of wrought iron really is. As of lately, wrought iron has been utilized for much more than it’s sturdy and durable nature. Delve into the eras of wrought iron to learn more about its uses from previous and modern-day times.

What Exactly is Wrought Iron?

Before we can venture into the origins of wrought iron, let’s break down the term. “Wrought” comes from the past tense version of the term “to work” in old English. Over time, “wrought” was replaced with the word “worked”. Essentially, “wrought iron” simply means “worked iron”.

The Inspiration of Wrought Iron

Prior to the time when wrought iron came into full use, casting was a popular form of metallurgy, which involves superheating the metal until it is transformed into a liquid state. This melted metal is then poured into a mold where it cools into its shape. Casting is a process that is 6,000 years old, so it’s been with us for quite some time. The earliest casting artifact is said to be dated circa 3200 B.C. in Mesopotamia. Wrought iron did not make its way into society until the 15th century, and the rise began in Europe. The demand for wrought iron increased gradually by the 16th century. China is credited with having utilized wrought iron the most around this time.

The Chinese have been crafting weapons since the 5th century B.C. Cast iron was their predominant method for weapon-manufacturing, but it was only a matter of time where the realization began that cast iron was simply not enough. This material was too brittle for weapons because it is particularly susceptible to breaking when being struck, so it was mostly used for cooking pans and decoration. It wasn’t until the great war between the Shang and Zhou dynasties where armies demanded a need for stronger and durable weapons. The size of the armies between the warring factions in China ranged anywhere from 300,000 to one million, therefore, a supply of reliable weapons was only necessary. The increasing importance of warfare led to the development led to the development of new, superior casting processes such as wrought iron, wrought, tempering, smelting, and more. Some of the best and most famous Chinese swords were created during this period, similar to the Tang Xi styled sword.

Wrought iron would not be considered as a working metal if it weren’t for the help of the Chinese introducing the material to the western hemisphere. Chinese travelers recorded an iron industry in the Alburz mountains, in close range to the Caspian Sea, which was practically a ground zero of iron technology making its way into the west.

The use of wrought iron in the west was initiated and popularized in England, where King Henry VIII began casting cannons and cannonballs from iron. Eventually, the English developed blast furnaces to process the weaponry at a faster rate. Once the medieval era rolled in, wrought iron was utilized for much more than just weaponry and tools. People began to incorporate wrought iron to cover doors and windows to protect buildings against attacks. It wasn’t long until individuals all around the world were to view wrought iron as a beautiful and strong material for all to rely on.

The Brawn and Beauty of Wrought Iron

From the 16th century on, wrought iron has been associated with a reputation of sophistication and class. In addition to molding railways and bridges that power our city, wrought iron is also responsible for residing within the infrastructure of the extravagant cathedrals of Spain, France, and much more.

Wrought iron finally made its way to the United States by the 18th century and dominated cities such as New Orleans and New York, and many others, where French design still reigns. Here at Atrium Wrought Iron, we survive the classic material through our services. Our customers are always more than satisfied with our installations, providing their homes with a flawless and elegant touch. Contact us today to learn more about what our services entail and to assess your design ideas.

About the Author: Atrium Wrought Iron